So hey it's been awhile! But I have news. Just finished an interview for a permanent job as a conservator at a museum on Alberta! I have no idea how it went, and I get to wait two whole weeks to find out! Yay! it's hard to feel positive about this process when its so stressful... anyway that's my news livejournal friends!

Posted via LiveJournal app for Android.

For awhile I've been thinking about moving from livejournal mostly because I don't find the mechanics of posting and managing posts to be all that convenient. So I've set up a wordpress blog and imported my livejournal posts there. I want to make my lj a little more private and my wordpress blog a little more public and I think this is the best way to do it. I'm still keeping my account here and will be posting occasionally. Livejournal is a great place for communities and I definitely want to keep taking advantage of that. So if any of you want to follow my sewing and sundry other things, follow me on wordpress! And while you're there, if you notice any glitches I'd really appreciate it if you'd let me know. I'm having issues with images in particular!

So the lacing strips tore and the channels aren't cut off the bottom and I'm still missing a few bones but it's close to wearable! I wasn't going to post these because it's not finished and I never took any progress pictures but I'm too excited! I'll do a proper post when it's finished I promise. 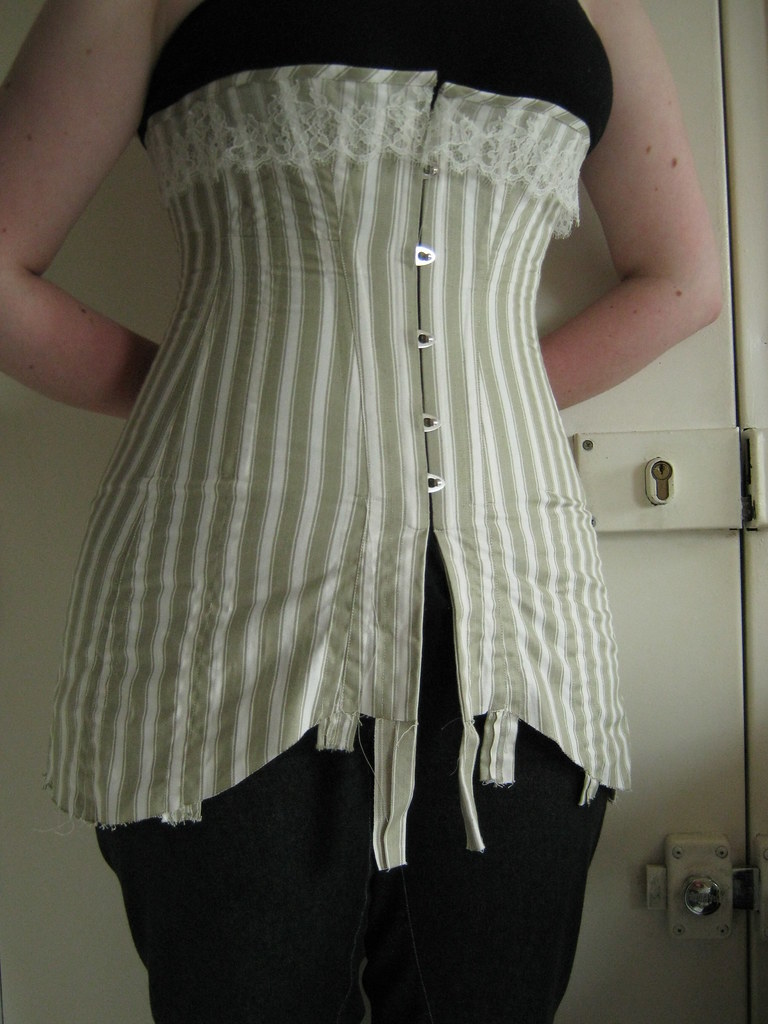 check out the set here.

"My" exhibit opened yesterday and myself, some of the staff and other stagiaires went to see the finished result. I'm pretty proud of this exhibit (despite the fact that I had very little to do with the exhibit design or mounting) because I did most of the conservation work.

So I'm in Bruges this weekend.

rose_bertin . It was awesome and I'm to tired to write a proper post just now but you can check out my pictures on flicker here. I will say that I was totally  distracted by all the damage that the candles in the castle were causing which totally ruined the romance of wandering through a candlelit castle in France! Once a conservator always a conservator I guess!

A couple of weeks ago I went to Opera Bastille for the third and final episode of Wagner's Ring cycle. This was my very first opera, and really my first encounter with opera of any kind. I literally knew nothing about opera and now I know a teensy bit about opera!

A woman at work was giving away a ticket she couldn't use. She called to offer it to my supervisor who declined because she had her opera singing lesson that evening, and the ticket was subsequently offered to me. I had a split second to decide and since all I know about opera is from what I've seen on tv where fancy people go and listening to people singing in a completely different language, I was a little intimidated. Plus I’m just naturally disinclined to exploring things alone. But hey, I'm here in Paris to experience new things right? So away I go.

I asked my supervisor if I would have to dress up for this and she gave me a look. That should have been my first clue. I looked up a couple of summaries of The Twilight of the Gods online and it looked deliciously Nordic. Medieval Norse mythology I can relate to thanks to my medieval studies degree! She did let me go early as she said I would need to go to get a good seat (second clue) which was very kind of her.

When I arrived at the opera the main stairs up to the entrance were roped off with police tape. There were a bunch of gendarmes hanging about which is a perfectly normal sight in Paris.  I did wonder: wasn't that where people were supposed to gracefully ascend into the cultured domain of the opera with their long evening gowns and tuxedos? I wandered a bit and followed the crowd to a side entrance. There were many people clustered outside the door with signs that read "une place S.V.P" literally begging for a ticket. OK, where I come from that might be acceptable outside a hockey arena but I have never seen so many people actually begging for tickets to a cultural event. Only in Paris!

Actually acquiring the ticket was another matter. I was supposed to pick it up from somewhere and the only likely looking place was a counter labelled "invitations." Was I invited? I mean this was the opera after all. Shouldn't I have something more than a name in order to acquire a ticket that was clearly in demand? Eventually I got up the nerve to push my way through the crowd of people presenting what suspiciously looked like season's passes. But I was in the right place and I easily enough acquired the ticket.

Now I turned my attention to actually getting a seat. Two massive lines snaked in both directions. I pushed my way through the crowd to try and find an end to one of them. Eventually I realized there actually was no end to either of the lines because they both just pushed up against a pillar! So helpful. I awkwardly hung about the sort of end of a line I chose at random, hoping it was the right one. I was lucky. There was a French woman who seemed very chatty, talking to those around her, and when the line started moving she seemed to know where she was going. I decided I would just follow her. Best. Decision. Ever. She was an old pro and knew the place really well. I ended up in the second row in the middle balcony with a great view.

I had some time to kill so I turned to people watching which was extremely entertaining. People were constantly shifting around in there seats, always angling for a better one. When a man in the row in front of me removed the programs he had been using to save three seats, there was an almighty scramble and you can bet the woman I followed nabbed one of those seats! A couple of men down the row from me were chowing down on baguette sandwiches and chatting away in rapid French. There was a real sense of community in my section (despite the battle for seats) and there was lively conversations about the opera going on all around me. Complete strangers would get extra copies of the programs and hand them out along the row. You can bet I forgot to grab a program before I came up so I was really glad to get one!

Eventually the opera itself began. It was, of course, performed in German but there were French subtitles displayed above the stage. I managed better than I expected following the French subtitles and my knowledge of the major plot points. I was kind of hoping for something more traditional as I wasn't such a fan of super contemporary interpretations. My wishes went unfulfilled but I was not disappointed! The ultra contemporary set and costumes required some real thought and interpretation which I really enjoyed puzzling out. And when that failed, I just enjoyed the wackiness! There was always something to watch and look at, either the stage itself, the subtitles, or the orchestra pit, I was fully entertained.

Some highlights from this interpretation; the three Norns in little black dresses and purses, a 1970's style suit in green complete with bellbottoms, half a canoe getting dragged around the stage, men dressed as barmaids complete with hands-on-hips bobbing and dancing (and twirling!), and a super awesome valkyrie with a really fabulous quilted dress.

This was definitely an unplanned event during my summer in Paris but has already become one of the most memorable. The entire experience was not what I expected, but in a good way! I wasn't able to stay for the whole thing (it was 5h20m long on a Monday night) but I was definitely sad to go. What a great first opera experience!

Last weekend I followed one of the guided walks from Walks Through Lost Paris. It was really interesting despite the fact that I felt like a dork sticking my nose in the book on every street corner. There are four walks all together in this book and I intend to do them all at some point. As fascinating as theses walks are, they are not the point of this post.

( Collapse )
The church serves as a very interesting example of the lives of objects. This is a subject that comes up time and time again in my studies as a conservator. This church was clearly able to evoke some many different phases of it's history without erasing those that came before or cluttering up the visitor experience with wordy explanations. I was impressed with such a sense of age as I wandered down the aisle but at the same time there was so much evidence for the current life of the church in the modern altar and sound system. I could also see how all these impressions could be easily lost by conservation efforts. The church was very dark and much of this is due to hundred years old candle smoke on the frescoes. One of the first things to go when conservation is undertaken is this soiling. But to clean this church would be to wipe away all the organic growth that allows for such a clear display of time built upon time. So much would be lost at the hands of a conservator here. While this is a lesson that was introduced to me so often in the last two semesters, I never really felt the truth in it until my visit to St Germain des Près.

So at the museum that I'm working at there are, in the library, extensive original issue of La Mode Illustrée. So on my lunch hour I'm scanning as many as I can stand. I'm almost through 1910 now. During my perusals of this wonderful resource, I found a little project to occupy my fingers when they're not engaged in stitching something old back together. I included the original text and a rough translation below.

( Collapse )
On another note, would people be interested if I posted the copies of La Mode Illustrée somewhere? I'm got most of 1910 and the pattern pages as well. If there's enough interest I can look into hosting the files somewhere.

So I started the mockup of the swing dress. It`s been slow going but hey, I'm doing this by hand! I slipped it on once I got the bodice cobbled together and immediately saw that the bodice was too long. I kind of expected this because I'm a bit short waisted and the pattern notes that the bodice tends to be on the long side. I took up the bodice a bit right away so no pictures of that but I do have pictures since then.

All in all progress is being made. I'll keep updating when I am able although I still don't have reliable internet access... *grumbles*
Collapse